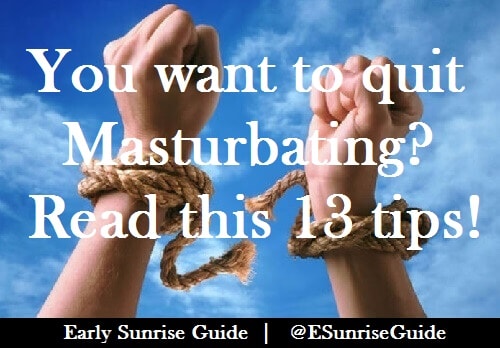 First off, let’s understand why it’s a sin to masturbate. Why is it such a bad thing? The world says that it’s okay and I’m not hurting anyone, so who cares? Besides, it’s my body and I can do what I want with it.
Well, not quite. Our body isn’t really ours. It’s like a loaner from God’s dealership. When God gives us the car, he gives us certain requirements. “Only use Premium gasoline, and change the oil using pure synthetic every 5,000 miles.”
Our bodies are “loaners” in the same sense. “What? Know ye not that your body is the temple of the Holy Ghost which is in you, which ye have of God, and ye are not your own? For ye are bought with a price: therefore glorify God in your body, and in your spirit, which are God’s” (1 Cor. 6:19-20).
When God created us and our bodies, he gave us, as men and women, the incredible power of being able to reproduce or have children of our own. Now, sex was created for two purposes. The main purpose, obviously, was to have offspring (kids) and to “multiply, and replenish the earth” (Gen. 1:28). And the second purpose was to cultivate love and trust within a relationship. And because of all of the confusion in the world with homosexuality and whatnot, this “relationship” is defined as a man and a woman, bound together through the confines of marriage. Sex should never be had between a man and a woman who are not married or between a man and a man. Any other use of sex, except the two listed above, are a perversion of God’s gift and a mockery of the power that He gave us.
“…the Lord gave, and the Lord hath taken away…” (Job 1:21). Because the Lord has given us this gift, promises accompany it. And when we break those promises, that gift will be taken away. Remember the parable of the talents in the New Testament (Matt. 25:14-30)? The men who were given five talents and two talents respectively went and did something with them. The man who had only one talent “hid his Lord’s money” (v.18). The Lord came back to see what had happened with all the talents. He was pleased with the first two men, but when he came to the man who had only been given one talent, he saw that nothing had been done with it and said, “Take therefore the talent from him…” (v.28). Our gifts will be removed from us if we don’t utilize them properly as they are intended. “If any man defile the temple of God, him shall God destroy…” (1 Cor. 3:17).
Now, enough of that. Onto the list:

Temptations come most often when we’re weak; when we’re tired, stressed, angry, or depressed. For each of these emotions, have a plan of action already put in place in case you’re tempted. In the middle of these emotions, you won’t be thinking straight. But if you have a plan of action already set in place, you can know exactly what to do to avoid the temptation when it comes.
Another way to look at this also is to know how to control your emotions. Satan feeds off of our emotions when we feel low and down on ourselves. Don’t let Satan attack you when you’re at your weakest. 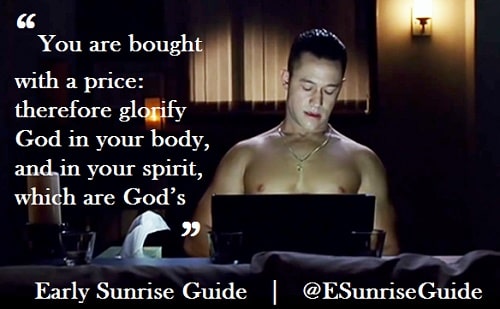 Get rid of all pornographic material. And you have to be pretty serious about it. Throw away any magazines that you might have. You can’t keep any hidden underneath your mattress. Holding onto just one little magazine means you’re still holding onto your addiction. Get rid of it. If you have a computer in your room, move it to a different room in your house that is public so everyone can see the screen. I can guarantee you’re not going to look at pornography with your parents walking by. If you have the computer in a public room but have trouble getting online when nobody is home, make all the arrangements you can to not be home alone. If your parents are going to the store, go with them, etc.
This also includes getting rid of anything such as condoms, toys, or anything else you might have that reminds you of masturbation. Get rid of it. Now.

Don’t think about it. Get your mind occupied on something else. Have you ever seen a smoker who sat on his couch all day long saying, “Man, I wish I could smoke right now… I’m really craving a cigarette right now…” that person ever quit smoking? No. Of course not. The longer you think about it, the sooner you’re going to give in to your addiction. Do you have a hobby that you really enjoy? Delve into it. If you don’t have a hobby, now is the time to find one. Do anything and everything you can to stay busy in one way or another. And the more mind-activity it uses, the better. For example: Doing a puzzle is going to keep your mind more active than watching a movie. Find something to do where you can’t easily be distracted.

Prayer and Scripture study is going to be key in quitting masturbating. All of these tips that I’ve already listed help, but it’s impossible to quit without the help of the Lord. If we rely on him, he’s going to in turn help us. You have to absolutely dive into the scriptures and fervently study them, not just read them. As you study them, you’ll gain the spiritual power to withstand your trials.
Along with that, it would be a good idea to do a special fast for yourself. And don’t ever feel like it’s wrong to fast for yourself to overcome temptation. It doesn’t have to be a Sunday, either. You can do it whenever you want. But in fasting, as you give up your bodily cravings (food), the Lord will reward you with more of an ability to resist other temptations that befall you.
I would strongly recommend speaking with your Bishop, also. Most things can be fixed with the help of a Bishop, but at times, counselors from LDS Family Services can be called in. This is rare, but if needed, he would be able to refer you to a counselor that can help as well. Many people who have never been to a Bishop for help are often scared to go talk to him. Please don’t be scared. Your Bishop is there to help you, and he will not talk to your parents. It’s something between you and the Lord. He may advise you to speak with your parents about the problems you’re having, but he can never disclose what the two of you have talked about.

Imagine that you’re sitting in a theater watching a three-act play. Only one act can play at a time. You can’t have act one and act two playing at the same time. The stage only has enough room for one act at a time. Our mind is the same. We can’t have a dirty thought and a good thought at the same time. One takes place and will push the other off the stage. Masturbation ALWAYS begins with a thought. Every single time. The desire that you have was initially triggered by a thought. If you can quickly change that thought before it takes place, the temptation to masturbate can be completely avoided.
I want you to think of your favorite color. Now, imagine that I’m holding up a book in front of you. You can clearly see the cover. You can clearly see the words. Then, I put up the second book in front of you. It’s a different book, which obviously has a different cover and different wording. And again, I hold up a new, different, third book. Like the two before it, it has a different cover and a different title. Good. Now, what does this have to do with your favorite color? Nothing. The purpose is to simply change your thoughts onto something else. As you were staring at the third book, you weren’t thinking of your favorite color until I reminded you of it again. This can be a good tool to use in the event that a bad thought enters your mind.
I want you to think of three events in your life that made you really happy. It could be a family vacation to the Grand Canyon, or a really fun day with friends. Whatever they are, make sure that you have three memories picked out and saved. One of the personal memories that I like to use is of my Father and I working on the car. It’s something that I can recall with so much detail. When I think of that, I always picture my Dad’s face. I always picture us laughing because we did something wrong, or simply just being in his company. For me, that memory has such a strong emotion attached to it, that I lose all other thoughts for anything else as I think about it.
Have you got your three? In the case that a bad thought comes into your mind, think of your first memory. Ponder it in your mind and relive the moment with the most detail that you can. Is a bad thought still in your mind? Think about memory number two. Again, relive the moment. Think about who was speaking in the memory, or what it smelled like, or what you were hearing. If the thought is still in your mind, move onto memory number three and do the same. By this time, the bad thought should have been completely replaced.
Some may ask, “Why do bad thoughts even come to me? They just pop into my head. It’s not like I want them there.” I once heard a quote by Martin Luther that said, “You cannot keep birds from flying over your head, but you can keep them from building a nest in your hair.” The same goes for our thoughts. Yes, bad thoughts do randomly come to our minds. But we can decide if we let them stay or if we let them go. And you’ll find that as you get better at replacing bad thoughts for good, the number of bad thoughts coming to your mind will become less and less.
One last trick to controlling your thoughts is to memorize your favorite Church hymn and sing it in your head as you have a bad thought. Again, there can only be one thing on the stage of your mind as a time. As you sing, that thought will be replaced.

And last but not least, don’t give up. You really can do it. I promise. I know that sometimes it feels like you’ll never be able to quit. You may have been trying to stop masturbating for years even. That’s okay. The Atonement of Jesus Christ is real and you can change.
One thing that I think is important to mention is that there really is a “hump.” Meaning, once you get past a certain point, it does get easier. After three weeks to a month, your body will start to slow down and you won’t have the pressure build-up anymore. Just keep going. You can do it. You’re doing great! I’m so proud of you for your desire to change. And I know your Heavenly Father and Jesus Christ are both very proud as well.
Source: Lay Treasure In Heaven
This is a sponsored post.